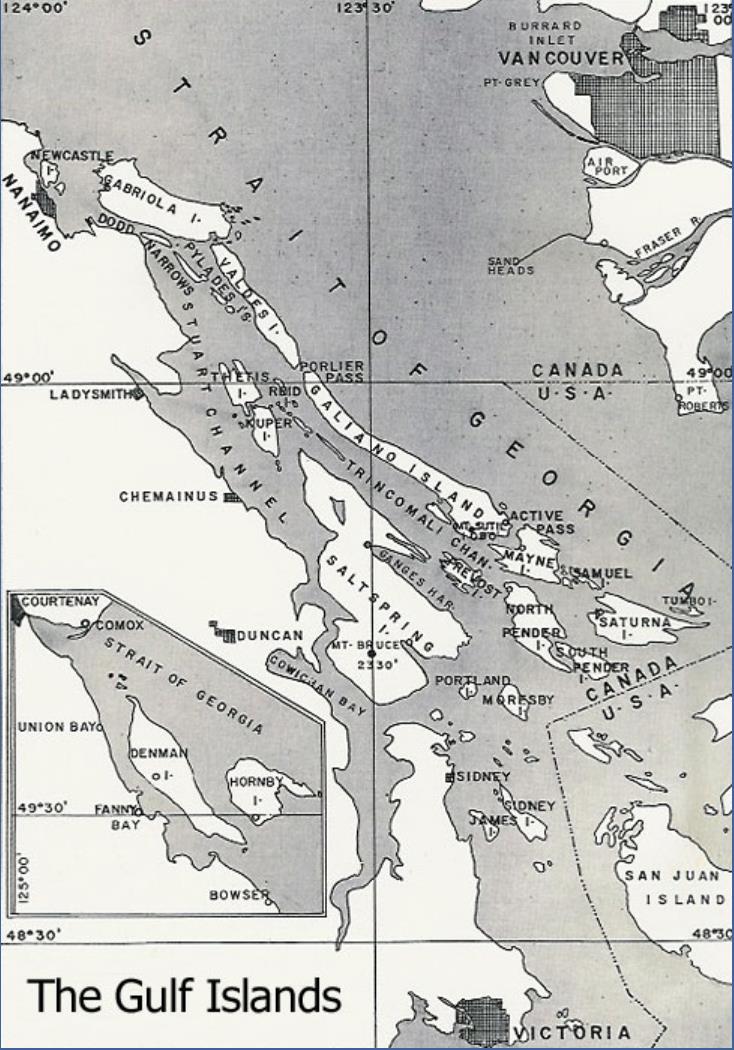 The ‘Gulf Islands’, as popularly known, form a fringe along the South East coast of Vancouver Island, between Comox Harbour and the United States boundary. The overall distance is about 62.14 kilometers (100 miles), but a break of 64.4 kilometers (40 miles) separates the northern and southern groups. They all lie on the south-western side of the Strait of Georgia. The Gulf Islands are separated by about 6.44 kilometers (4 miles) of water from the nearest of the San Juan Islands off Washington State. Taken as a whole, the Gulf Islands cover an area of approximately 40,470 hectares (100,000 acres).

The northern group of islands includes Denman Island (just south of the Comox Peninsula) and Hornby Island (offshore from Denman).

The southern group falls into three sub-divisions. The near-shore islands are closely related to the mainland from which they are separated by narrow, generally irregular water channels. They include, from North to South: Newcastle and Protection Islands (close to Nanaimo), Thetis, Kuper, Salt Spring (the largest), Prevost, North and South Pender, Portland and Moresby Islands. Numerous small islands farther south are not included here.

The outer sub-group consists of five large elongated islands facing the Strait of Georgia. From North to South they are: Gabriola, Valdes, Galiano, Mayne and Saturna. A number of small islands are associated with them.

A third sub-group consists of small island chains which lie between the two main sub-groups. To the north are Mudge, DeCourcy, Ruxton and Pylades Islands and farther south, Reid, Hall, Norway, Secretary, Wallace and associated islands.

The more important islands range in size from Salt Spring, 26 kilometers (16 miles) from north to south with an average width of about 8 kilometers (5 miles), to Portland Island (Princess Margaret Marine Park) which is about 2 kilometers (1.24 miles) in either diameter. The inter-channel chains consist of small elongate islands, islets and reefs.

Climate: The climatic conditions on the Gulf Islands are similar to those on the adjacent parts of Vancouver Island. Temperatures are generally moderate throughout the year, and extremes of temperature are rare because of the marine influence. The average frost-free period for the Gulf Islands is from 200 to 250 days. Rainfall is moderate and varies from an average of 91.4 cm (36 in) per year on Salt Spring Island to an over-all average of 76.2 cm (30 in) each year for the other islands. Most of the rain falls during winter months.

Discovery: In 1792, Captain George Vancouver met Galiano and Valdes, Lieutenants of Don Juan Francisco de la Bodega y Quadra, off Point Grey (Vancouver-mainland). Vancouver and the Spanish skippers exchanged information on the passes between the mainland and the large island later known as Quadra’s and Vancouver’s Island, which had just been circumnavigated by the Spaniards. These passes, very dangerous for sailing ships, were those among what are now known as the Gulf Islands. Names given at that time still remain, for instance, Narvaez Bay, Galiano, Valdez, Gabriola and Saturna Islands. Surveying and charting of the area continued for over a hundred years, first by British Admiralty ships and then by the Canadian Hydrographic Service.

No matter how you put it, Peter Nash has sold over:

Buyers should note that information on this web site is submitted as descriptive as to type and quality of residence and property only. Figures relating to size and quantum must be taken as approximate. You are responsible for doing your own due diligence and for confirming any pertinent information.

I spent 50 years as a realtor for Vancouver Island coastal properties and now I have moved into consulting to help clients connect with great realtors on the west coast – Please contact me today to see if I can assist you at no cost to you.